INTERVIEW  WITH  BRANISLAV  NOLIN,  OUR  EXCHANGE  STUDENT  IN  USA 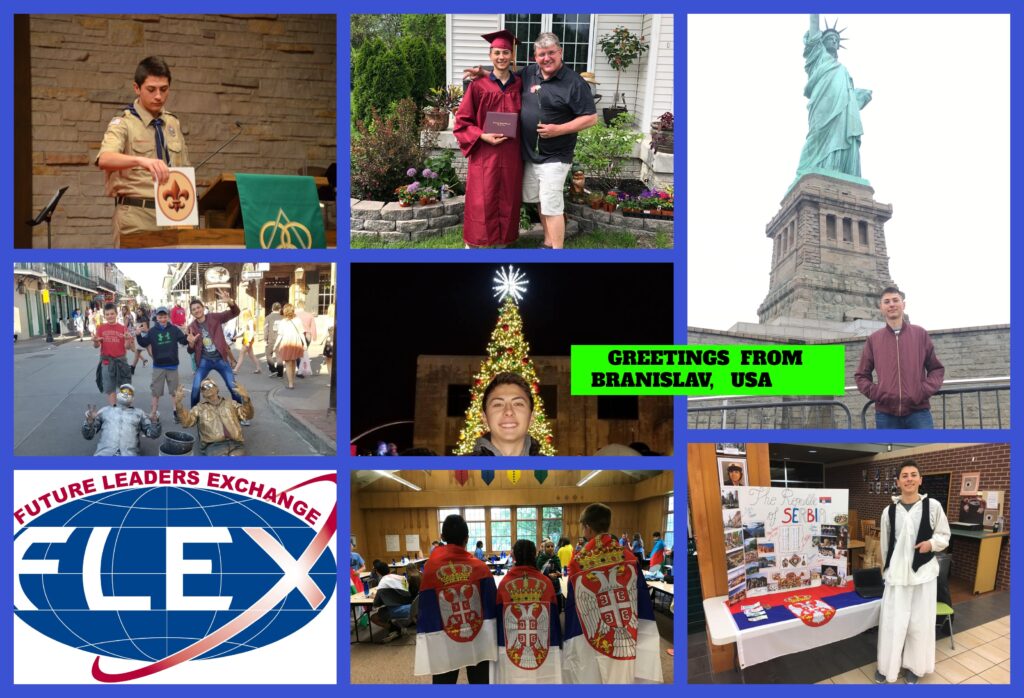 1.  Why did you decide to go on an exchange?

I always had a passion for meeting new people from different countries and, also, listening to all the stories they had about their journeys and all the international experiences, but I never actually had a chance to travel as much as I wanted to. The stories were my main source of knowledge about some places, people or cultures. And that’s why, at one point of my life, I made that crazy decision to be an exchange student.

The program I was on is a US government sponsored program, so it wasn’t so easy to get in, as the acceptance rate is only 2%. I had to go through a lot of rounds of testing, which included interviews, proving English language skills, writing essays and also the longest application I ever had to fill in my whole life. In the end, I never regretted spending that much time on it, because it was totally worth it.

3.  How did you prepare yourself for being away from home?

I don’t think there’s actually a way to prepare yourself, but even if you wanted to, in my case, I didn’t have time to prepare myself because going to America was my dreams coming true. The only thought I had before departing was: “Just put me on a plane, I wanna go”.

4.  What were your expectations about the US before your departure?

When you get into the program, you get told that you shouldn’t have any expectations because they’re bad for a good start, but as a human it’s impossible to have none. Even though I was trying to minimalize them, as much as possible, there were still some. I thought that American high schools and people would be the same as in movies, but it came out to be wrong. I didn’t expect everything to be so big and spread out, and I also thought that American families would be stricter and more formal than Serbian, and that there would be way more rules and chores.

5.  What was your first impression after you arrived there?

For the first few days, I had my, as I would call them, tourist lenses on, and was looking at America through them. I didn’t really think about the things going on. I was just looking at physical differences, for example, how roads or cars are way bigger than ones in my country.

The very first thing that I loved about America is their idea of patriotism-the first weekend I was in the US we went to the State Fair and there were probably 30,000 people in a really small place, so it was pretty loud and crowded. At one moment, while we were walking, everybody just stopped and it was so quiet that I was wondering what was going on, but I was told that they were about to sing the Anthem, as they do before every major and minor events.

One more thing I really liked about Americans is their smiles and kindness, because they tend to smile way more than Serbian people do.

6.  How did you get used to your new study and living environment?

When you go there, you have to realize that you’re the one being different and that you’re the person that is supposed to change and accommodate to the environment, not to the people that live there. Second of all, you also have to stay open-minded all the time, especially for changing the way you do things, even though you’ve been doing them the same way for your whole life. What helped me a lot in the beginning was copying what other people did-I would just imitate the American people and try to fit in, and of course, ask a lot of questions. For most of the time there’s something you don’t understand and something you don’t know, and then you simply have to ask a lot of questions, like I did. Another important thing is to realize that you’re there to make mistakes and learn from them.

7.  What was it like to study in Ankeny compared to Kikinda?

One of the good things in American schools is that teachers are usually not so strict as the Serbian ones and tend to have way friendlier approach. There are no books or notebooks because everything is digitalized. You have a laptop you get from the school where you do your essays, homework and quizzes. You get half an hour for lunch and you can arrange your own schedule, which I think is really important for a teenage, because you get to actually discover what your likes and dislikes are.

Negative sides of American schools are that you have the same schedule every single day, which can be a bit boring, and that there’s no afternoon shift. You also have to stay at school for a really long time, because you have eight class period every day.

8.  Were you homesick? Are you nostalgic about the US now that you are back in your country?

Of course, it’s impossible not to be homesick when you don’t have your parents or old friends beside you, but for me it was only the positive nostalgia. While I was in the US, I missed my friends and family the most, but there were some moments when I missed our food, smells, or just speaking Serbian. What I‘m most nostalgic about right now is speaking English all the time, but, of course, I also miss my friends, school and my host family.

9.   How did you get used to American food? Are there big differences between American and Serbian cuisines?

It’s known worldwide how sweet American food is, even though it’s supposed to be savory. I did get used to American food with some difficulty, but not a lot. The reason for that is that most of the time you eat processed food, junk food, something from McDonald’s, Casey’s or Dairy Queen. Even when your host mom comes home after work and says that she’s going to make dinner, you don’t eat something cooked. She just grabs something out of a box or a can, and puts it in the microwave, and that’s your dinner.

There is one funny story about my first food shock. It was around Thanksgiving time and I hadn’t eaten cornbread for 4 months, even though it’s something I really enjoy. My host mom made it for me, and I was so excited about it. But, when I took the first bite of it, it was sweet, it tasted like a cake, so I just spat it out.

10.  Are there any challenges of being an exchange student?

I would certainly say yes, because when you go abroad you don’t know anybody and the biggest challenge you get is to make a life out of nothing. You have to turn strangers into your family and you have to make friends. You have to accommodate to a different language, which can be hard even if you speak good English, or to get used to a different culture. What I think is the most difficult thing when you’re an exchange student, and the thing you have to get used to, is when you actually get back home, because you don’ have THE home anymore, but you just want to be in both places at the same time, as you have two separate lives.

What activities did you do or join while studying abroad?

I had several extracurricular activities and I had some activities with my host family. The most important activity I did with my host family was Boys Scouts, because both of my host brothers are members, and I also found good friends over there. I participated in Model UN, where I won the first award in the state. The third activity, which was also really important and I loved, was volunteering. In America, it’s something everybody does, as it’s nice to help other people. Besides more than 150 hours of volunteering, I was building a prop airplane with my friends.

11.  What was the most dangerous thing that happened to you in the  US?

As my host family used to say, in America you get the right of free choice, so you choose if you want to be safe or not. For most of the time I was giving my best to stay safe, but as a teenager, I also had to try some dangerous stuff. So, one night I had a  group of friends coming over and we were making s’ mores, and then we needed some more marshmallows. Therefore, we went to Hy-Vee in a car and we were speeding–around 35 mph more than the limit. At one point, the stop light turned red, and we barely slowed down before crashing on the interstate.

12.  What are your plans now when you are back in Serbia? Do you have ambitions to continue your education in the US?

Of course, I’m continuing to cooperate with American Councils, the organization that helped me get to America, and I’m working on my career with them. As well, I have one more year left of high school and then I have my college, which I wanted to do in America, but it gets really expensive and complicated to get there, so I decided to stay in Europe for my Bachelor’s degree. But, one day, I hope I’ll go back to the US for my Master’s.

13.  What have you gained from participating in the exchange program?I gained a lot of friends, a lot of experiences, saw so many things, and learned something new. I think I grew up as a person, matured a lot and got prepared for the life that’s in front of me. I learned to appreciate the small moments, and that every single thing you do can change your whole life path.

14.  What is your advice to students who are planning to study abroad?

To all of the future exchange students I would say: